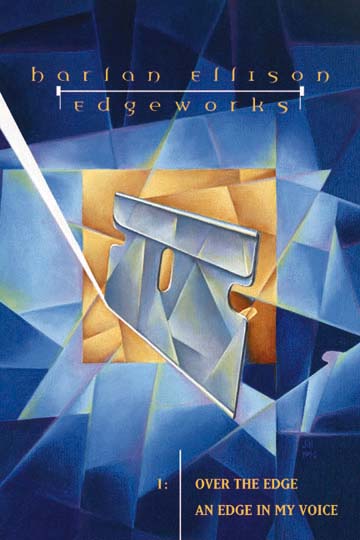 Coming In May 1996
Harlan Ellison's
Edgeworks: The Collected Ellison Vol. 1

White Wolf Publishing releases the first of 20 volumes of the collected fiction, essays, teleplays and columns of the writer The Washington Post calls "one of the great living American short story writers." The first of these handsome volumes includes An Edge in My Voice and Over the Edge, two books with completely revised, updated and expanded manuscripts...the variorum texts!

Come this May, very near his birthday, the author who has won more awards for imaginative literature than any other living fantasist will unleash controlled chaos with 31 razor-sharp EDGEWORKS.

Harlan Ellison's stories and essays have been at the cutting edge of contemporary American Literature for over forty years, but he stubbornly refuses to abandon the use of a manual typewriter. He's involved in every medium from television drama to comic books and his works are translated into 26 languages.

His awards include The Silver Pen for Journalism from P.E.N., the coveted World Fantasy Lifetime Achievement award, the Edgar Allan Poe award of Mystery Writers Association (2 times), the Nebula (3 times), the Hugo award (an astonishing 8 1/2 times) and the prestigious Writers Guild of America award for Most Outstanding Teleplay four times. He refuses to eat lima beans.

For the release schedule of all 20 volumes contact:
Kim Shropshire-Director of Marketing
Telephone: 404-292-1819 ext 204
Email: wwkimsoon@aol.com

Over the Edge
Foreword: THE FRONTIERS OF EDGEVILLE
New Introduction by the author
Foreword: By Norman Spinrad
Pennies, Off A Dead Man's Eyes
The End of the Time of Leinard
3 Faces of Fear: An essay
Blind Lightning
Walk the High Steel
Shadow Play
The Words in Spock's Mouth
From a Great Height
Night Vigil
Xenogenesis
Rock God
Ernest and the Machine God