Revealing he had it also would have exposed him to the myriad questions of who authorized him to collect things he wasn't authorized to, and how that apparatus worked. When Nixon's list of people he wanted wiretapped continued to grow, this was precisely what Hoover feared. He was, in the end, a guy who equated knowledge with power, and he loved that power - but his own need for the Bureau to be seen in the best possible light (and thus, himself in the same light, as the man at the top) locked him in place. It was loyalty to job and bureau first that drove him, when Nixon won the office, to inform Nixon early on that Johnson had him under surveillance. Where friendship met duty, duty came first.

The public unraveling of Cointelpro certainly didn't make the heart attack that killed him any less likely. And perhaps, Frank, that's part of why Cointelpro didn't maintain the weight of a Watergate in history - not because the media didn't report it (for they did), but the chief culprit and string-puller was already dead when the skein was finally pulled apart, so there wasn't the circus-like atmosphere of Watergate, with Nixon declaring for the media, "I am not a crook" and demanding resignations from people for not firing the special prosecutor. Had Hoover been alive and subpoenaed to appear before the House Select Committee, I'm certain we'd have gotten a lasting image upon which to hang the memory of the program. Like Hoover pulling out his scrapbooks on multiple presidents, past and then-present, the gavel trying to bring order from the chaos as in the House chamber as Hoover croaks, "I may be headed to hell, but I'm taking every last one of these sons of bitches with me!"

Alas, all we got was Gerald Ford falling down a lot.
Top

History is cruel but fair. For all his trouble Hoover is now a cross-dressing joke.

Raymond Chandler happened to be dining in a restaurant in Hollywood once while Hoover was also present. This in the early 50s at the height of the Red scare and the Blacklist. Hoover sent one of his lackeys over to Chandler who told him that Hoover wanted to meet the the great mystery writer. Chandler answered, "Tell Mr J Edgar Hoover to go to hell!" (That's what an English education gets you; you say Mister even when you're telling a guy to go to hell.) Chandler refused to brook a thug like Hoover even while Senators and Congressmen quaked in their boots.
“We must not always talk in the marketplace,” Hester Prynne said, “of what happens to us in the forest.”
-Nathaniel Hawthorne, The Scarlet Letter
Top

Interestingly enough, though I'm not sure of Mr. Hoover's sexual orientation, there is no evidence that he was a cross dresser. Truman Capote claimed he started that rumor, but he's not that reliable a source.

Chuck
Some people are wedded to their ideology the way nuns are wed to God.
Top

The only person to ever claim to have witnessed Hoover cross-dressing was Susan Rosenstiel; she was paid for her story, and proved on at least one occasion to be a perjurer. In the absence of no other corroborating witnesses? She's an unreliable witness at best, which is how history has come to judge her.
Top

The only person to ever claim to have witnessed Hoover cross-dressing was Susan Rosenstiel; she was paid for her story, and proved on at least one occasion to be a perjurer. In the absence of no other corroborating witnesses? She's an unreliable witness at best, which is how history has come to judge her.

Personally, I think he was cross-dressing as a human being.
Top

He was a monster with way too much power and zero sense of humor. We breed those types in this country. Those are the ones who get the job done, albeit the job and should never be thought up in any sane land.

Watergate went after half of power and power took Nixon out. Not that Nixon really suffered. Oh, there's that. The two Black Panther dudes are not alive to get David Frost interviews or tear felt blubberings from the Bob Dole wingism.
Top

And no other country has them, Frank? Please.
Top

I don't live in other countries. You care about what your country does first.

Maher had a funny joke: Why don't the Chinese go to Jewish restaurants?

FrankChurch wrote:I don't live in other countries. You care about what your country does first.

But the way you said that implies that you think we've cornered the market on monsters, which is bullshit.
Top

FrankChurch wrote:I don't live in other countries. You care about what your country does first.

But the way you said that implies that you think we've cornered the market on monsters, which is bullshit.

Plus, I will point out that a good many of Frank's posts have high praises for other countries while solely criticizing the U.S. and Israel -- you live in Israel, Frank?
All I need is a change of clothes, my Nikon, an open mind and a strong cup of coffee.
Top 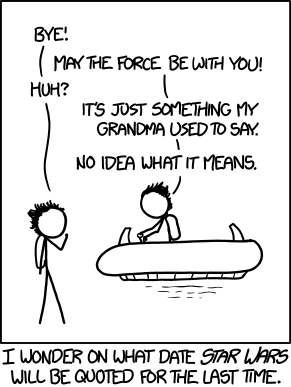 Not anytime soon I would imagine...-sigh-
“We must not always talk in the marketplace,” Hester Prynne said, “of what happens to us in the forest.”
-Nathaniel Hawthorne, The Scarlet Letter
Top

Our side calls Israel the 51st state.
Top

Unrest in Hong Kong. Unlike Ferguson it is not about black violence but the love of democracy. Sigh.
Top

Thread drift. Keep it in your own thread, Frank.
- I love to find adventure. All I need is a change of clothes, my Nikon, an open mind and a strong cup of coffee.
Top

Working at home today and during lunch heard an interesting radio discussion on the effects of social media on social etiquette including atttudes towards death and grief. One of the panelists commenting about the apparently growing practice of dying folks leaving instructions for maintaining an online presence after their demise asked if this in some way "violated the traditional notions of death". Not completely sure what to make of this statement other than to see it as a variation of the old "how can we miss you if you won't go away" thing. Interesting to think about though.

If after the death of a friend or family member you got a sealed envelope with a letter that the deceased had written and arranged to have sent post-mortem I think most people would be profoundly touched and moved by this. You'd feel a sense of connection. But what if a week or two or even a month after a person died you got a generated email from them? Would you feel the same way? Or would it creep you out?

Another panelist told the story of attending a memorial service for someone on the Second Life virtual site. All the attendees knew the deceased only through her avatar. My question is, who were they memorializing? They didn't know the real person at all. Were they memorializing the avatar?

I find the whole idea of social media to be interesting although I don't participate on Facebook or Twitter. I have no real qualms about it. Whenever I visit back in Georgia some of my friends invariably ask me why I don't "get on Facebook". I don't know. I suspect it's because when you get right down to it I'm just not a very sociable person.

Twitter seems ultimately trivial to me. Frankly what purpose is served in expressing every gnat thought that flickers through your consciousness? And I really don't care what you had for breakfast.

Facebook seems an extraordinary way to communicate over distance. But really, how much intimacy is truly possible? Isn't Facebook really only a placeholder for friendships? Don't we still privilege facetime? I can see where Facebook might turn into a replacement for friendship, a way of holding someone a distance while pretending to hold them close.

But I'm a virgin talking about sex. Who uses Twitter and Facebook? What do you use it for? Do you have any Facebook only relationships?
“We must not always talk in the marketplace,” Hester Prynne said, “of what happens to us in the forest.”
-Nathaniel Hawthorne, The Scarlet Letter
Top
Locked
783 posts